GUEST COMMENT Managing the data influx: How to get the most out of your digital interactions

EDITORIAL Adidas, Next, Virgin Wines on whether shoppers who bought online in lockdown will continue as stores reopen

Personalisation in conversation with Camilla Tress at Oliver Bonas

This is your 1 complimentary article for this month

For the mobile industry, this is the busiest week of the year: the Mobile World Congress jamboree takes over Barcelona for a week and my feet get a battering. This year, rather than be treated to four days of glorious sunshine and warmth, we had rain, wind, cold and even snow – deep and crisp and even, to be precise. We were also treated to, well, nothing much of substance.

The trouble with MWC is that it is far too busy basking in its own glory. It is huge and it is a showcase of some incredible technology and ideas. But no one ever brings up the awkward questions of building networks that work, creating a regulatory frame work that will make it usable and, this year in particular, tackling the huge levels of fraud that now take place over mobile.

The thing about much of what is talked about down here is that it is really long on promise and short on practical deliverability. While there were a number of interesting announcements that would be good for retailers, much of what is talked about doesn’t really take into account the retail sector and its massive reliance on mobile. The onus at MWC is very much on the game and entertainment side of things – and don’t you just know it from the pretentious man-bunned wannabes that strut about looking important.

But the impact on retailers of what the mobile industry does is huge. For instance, one of the things that leaped out this year was that network operators – and Spotify – are working on rolling out voice assistants. These seem to be the device du jour and it seems that soon the consumers are going to be spoiled for choice.

Google Home and Alexa have made such an impression that many leading telcos see a huge opportunity in creating more of these devices to do all manner of things – one of which is to tie up with retail.

They only problem is with the voice assistant play is that it’s a non-starter. Surely, this sort of tech will just live in your phone – you’d think of all the places MWC would be where we’d be show casing how they should be a phone thing not a new device type – and you will connect everything, your speakers, your lights, heating etc… to that. That way you can just tell it what you want to do and where. I tried out a Google Home: I found I needed it in several rooms all at once. Like my errr phone was. Have these people never seen the Movie Her?

The other problem that no one at MWC ever talks about is the flakiness of the technology. We have all heard about Alexas all over the UK ordering cat food because an advert on the TV says “Alexa, order cat food”. But that is the tip if the iceberg. One chap told me this week about how he had set up his IoT controlled lights to be all nice and seductive for when he returned home that evening with a date. He duly got home and… he and his beloved stood in complete darkness while his smart home system did a software update that took 12 minutes. The mood was, he reports, somewhat dampened.

Another horror story emerged from someone else who set his robot vacuum clean to hoover his living room at 2am when he was in bed. Sadly, at some point between retiring to bed and 2am, his dog did a whoopsie on the carpet and the story teller awoke the next morning to find that the robot had spread the dog’s business all over the whole floor as it had gone about its business.

Now, champions of AI at MWC will say that AI will make these sorts of problems a thing of the past; that more technology will solve the shortcomings of the technology that we have that doesn’t work properly. They are probably right, but for now we really do need the mobile industry to stop patting itself on the back and try and address some of the real issues it faces getting this stuff working in the here and now for real customers such as retailers.

And boy do they need it. With Maplin and Toys R Us both going under this week, and Prezzo closing 100 restaurants, retailers need to do something. Technology surely holds the key, but until it can be made to be reliable and affordable then no one can risk taking the punt. To wildly paraphrase the closing lines of the legendary 70s movie The Towering Inferno, "How many poor innocent retailers need to die before someone does something?" 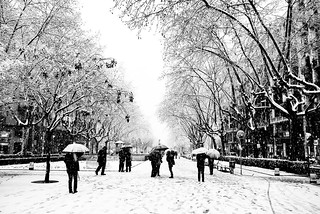 EDITORIAL How do shoppers want to buy post-pandemic – and how are retailers responding?

EDITORIAL Where now for the shift online as UK shops reopen?